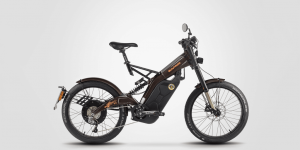 Speed Pedelecs, meaning electric bicycles with a maximum speed of 45 kph are allowed on bike lanes in Denmark as of July. Until now, they had to be registered as a small motorbike and had to follow rules different from those for bicycles.

Still with the new Danish law, some rules remain that neither apply to cyclists nor pedal-assist bikes with speed capped at 25 kph. Hence S-Pedelecs still require a driver’s license for either moped or car in Denmark.

In addition, the law will be evaluated after one year as it faces stiff concerns from organisations such as the police and national associations of pedestrians and cyclists. Indeed it is not without risk to introduce light electric vehicles which easily reach speeds of up to 45 kph on cycle lanes. Compare this to the average speed of a conventional cyclist that ranges from 12 – 25 kilometres an hour and clashes seem inevitable.

Also the risk of injuries for those riding these fast e-bikes increases, particularly on cycle lanes holding obstacles one would not find on a paved road.

However, the reason to introduce the new law is valid too as the Danish government aims to encourage even more people to take up (electric) cycling in the world’s most developed bike nation. Speed pedelecs could indeed encourage adoption of bikes and even replace smaller cars as they facilitate travel enormously, while retaining most benefits of a bicycle.

To stifle or to foster, is the question. Or perhaps, do away with all such classification. Introduce one sole category instead but add extended control mechanisms. Namely obligatory torque sensors that regulate the speed limit depending on the actual pedalling power of a rider. That way, elderly cyclists would not be propelled too fast, nor would children. Trained or avid commuters however could thus get up to ideal city speeds of about 32 kph.

Learn more about the global legislative issue electric bicycles face in this video. A petition to update U.N. legislation has just been set up and you can find the link below.