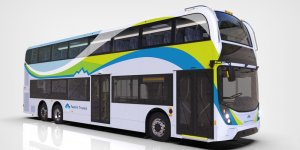 Scottish bus manufacturer Alexander Dennis (ADL) will be sending two of their Enviro500 double decker buses to California for public transit use, fitted with a Proterra battery system. They are the first electric double deckers to make it across the pond.

The move is part of a project that begins next year with the first two electric double decker buses due on U.S. soil. The company behind the initiative is the transit operator Foothill Transit, who already has several Proterra e-buses in their fleet.

In order to ferry more passengers in future on the 35 mile stretch between San Gabriel Valley and Los Angeles, the double decker buses were chosen. ADL, also known for the London double decker buses it is making together with BYD, was selected to provide the chassis, while the motor and battery will come from the US-based Proterra.

According to the initiators of the project, the buses will have a range of 160 to 200 miles (over 300 kilometres) and can carry up to 80 people.

The purchase price for the buses has been offered at 1.6 million dollars, and Foothill Transit is receiving a 1.4 million dollar subsidy to help pay for the project.