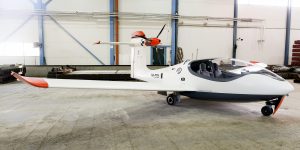 The prototype that now managed its maiden flight in Norway utilises a propulsion system that has been in the making since 2010. It has a combined power of 97 kW and couples a 60 kW electric motor with a 57 kW diesel engine. The electric motor serves as generator.

The commercial version of the Equator P2 Xcursion will use a 6 kWh Li-ion battery. For the test flights though, the P2 took a LiPO pack with 18 kWh capacity on board that used a separate BMS and weighed in with a heavy 100 kilos.

The electric aircraft is a two-seater and Equator says it has a maximum takeoff weight (MTOW) of 750kg and a load of 240kg. It can fly up to a maximum cruising speed of 130 knots, that is about 240 kph. In economy mode, the Norwegian company specifies a range of a maximum of 1,565 kilometres. Impressive data and the reason why Equator considers hybrid flying as a “bridging technology, that can provide green flight, but still have suitable long range capability,” on their website.

During the test flights at Norway’s Eggemoen Technology Park, the P2 Xcursion took off at 70 knots and flew at 100 knots at an altitude of about 10 metres before landing.

For this they need money and the company is actively looking for investors to further develop their hybrid aircraft.