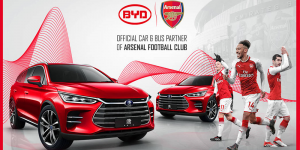 A sponsoring deal between London’s football club Arsenal and China’s BYD is likely to fall through. BYD is warning against an impostor in their own ranks that has been using their name to close deals without their authorisation.

If the allegations prove true, and it is looking very much so, both Arsenal and ourselves would have been fooled. An earlier article declared BYD the new sponsor of the premier league club.

Now the Chinese company have asked the police to investigate. In a statement they clarified that Li Juan and “Chen Zhenyu” neither are nor were employees of BYD even though they were posing as such. This means “BYD has never authorized the aforesaid persons to conduct businesses in the name of BYD or sign any contract on behalf of BYD,” according to the statement.

It has turned out that this affects the “contract” with Arsenal as well. Unfortunately so actually as Arsenal has one of the largest fanbases of any western football club in China, with 4.7 million followers on social media platform Weibo.

Therefore, Arsenal had happily announced the partnership in April, saying it had reached a deal with “the world’s best-selling electric vehicle manufacturer”.

As part of the deal BYD would receive pitch-side LED signage and branding on seats at the Emirates Stadium. It would also have access to Arsenal Legends for special promotional events in China.

On the latest revelations of fraud, Arsenal said it is “investigating while talking to senior management of BYD”.

In China, Shanghai police has arrested a woman on suspicion of contract fraud and faking company seals, BYD said.