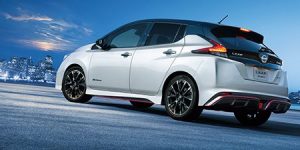 In the first half of 2018, a total of 18,000 new Nissan Leaf were delivered to Europe, according to Nissan. The Japanese manufacturers also added that it was the most sold electric vehicle on the continent during the same period.

A total of more than 37,000 orders for the second generation of the vehicle were placed in Fall 2017. About 1/10 were ordered from customers in Germany for a total of 3,500 vehicle orders.

Independently from this, another version of the Leaf will be released at the end of this year or beginning of the next with a larger battery (rumoured to be 60 kWh instead of 40 kWh). The newest reports refer to the “E-Plus”, which will have a larger range, a well as more power; specifically 149 instead of 110 kW.

In Japan, the more athletic Nismo version of the Leaf will be sold starting on the 31 of July, after being introduced at last year’s Tokyo Motor Show. While the mechanics largely remain the same, the design is taking on some of the Nismo Roadcar series. The motor sports version will feature double wings, a lower centre of gravity an 18 inch aluminum wheels.