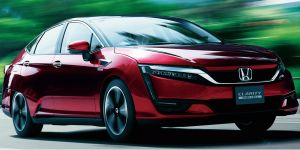 Honda will be bringing their Clarity, which was originally marketed as an FCEV, to Japan as a plug-in hybrid. For the first year, the company hopes to sell around 1,000 units.

The Honda Clarity PHEV will have a purely electric range of 114.6 km, thanks to a 17 kWh battery (The WLTP range was called 101 km) and will start selling in Japan for about 5.9 million Yen (45,000 euro). Propulsion is managed by the combination of a 1.5 litre combustion motor and a new hybrid system call i-MMD, which combined two electric motors. Honda stated this is the first vehicle where the system is being installed. The total performance of the Clarity PHEV stands at 135 kW. The battery of the vehicle will also be fast-charging capable and will be able to charge to 80% capacity in 30 minutes, according to the manufacturer.

Last year there had been some rumors that Honda were planning a fully electric version of the Clarity. Over the past year, not much has changed with the situation, however. The market launch of the Clarity PHEV has not brought mention of any further BEV development with it. The company generally set themselves the goal to make about 2/3 of their income through the sale of electrified vehicles by 2040.