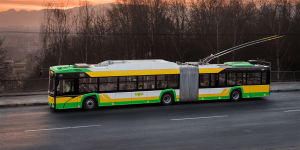 The order is valued at 29 million euros, and was placed by the city council. The local transit company CTP Cluj Napoca will be operating the vehicles.

The buses feature a total performance of 250 kW and run on Skoda motors. To add additional power storage, super capacitors are used. A total of 140 passengers can be ferried by the buses.

This is not the first order from the city for Solaris either, as the city ordered 23 electric Urbino 12 buses from Solaris last year. 11 of these buses are already in operation, while the remaining 12 will be delivered by the end of this year. The contract also stipulates that an additional 18 of the vehicles can be tacked on to the order. Considering the newest order, that will make CTP Cluj Napoca the biggest Solaris fleet operator in Romania.