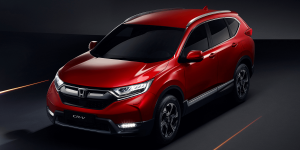 Honda has started sales for the new CR-V, which is being offered as a 7-seat version with a hybrid motor for the first time. In Japan, sales begin now, while European markets will have to wait until October 20th. The hybrid version won’t be offered until early 2019, however.

So far, we only know that the hybrid CR-V is fitted with an Intelligent Multi Mode Drive Sysstem, which combines a 2 litre gasoline motor in an Atkinson cycle with an electric motor, including a separate generator. The hybrid system does not use a conventional powertrain. Instead, there will be a specifically developed solution which optimizes torque and fuel economy. The technology was adapted from the Honda Clarity and Insight.

The basic version of the CR-V will go on sale in Europe in October with a price-tag oof 28,490 euros. There will be four different set-ups to choose from. The price for the hybrid variant has not been disclosed at this point.