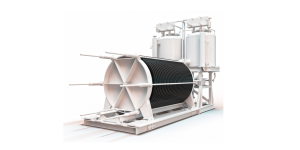 The Norwegian manufacturer Nel is planning the construction of what they claim to become the world’s largest electrolyser factory with an annual capacity of 360 MW. The facility is directly related to the major order that Nel received from the U.S. startup Nikola Motor.

At the start of July, it was announced that Nikola had ordered 448 electrolysers, including hydrogen tank equipment from Nel. The order was made because Nikola, which is dedicated to manufacturing hydrogen trucks, decided to invest in the creation of an H2 gas station network in the USA.

Apart from fulfilling said demand in the States with the new factory, Nel also announced that their new facility would function as an extension of their current plant in the Norwegian city of Notodden. 30 to 40 employees will be working in the new facility in a five-shift operation. The total investment will cost the Norwegians about 150 million Norwegian Krone, or about 15.5 million euros. The high investment cost will be met by lower production costs, says Nel, and will be achieved by automating production. With the additional production, Nel will be increasing their current capacity ten-fold.

The construction of the factory will begin in the second half of the current year, according to Nel. They plan to begin production in early 2020.