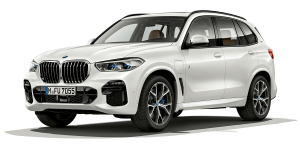 BMW has presented the newest version of their X5, this time with a plug-in hybrid system, and has released first technical details. The SUV will hit the market in 2019, while the price is still unnamed.

The most interesting point in the update is a boost to the electric range of the hybrid model: by increasing the battery capacity from the previous 9 kWh to a sofar unspecified size, the electric range was boosted from 31 km to 80 km, according to the WLTP cycle. The new range was made possible due to new battery cells, which have a higher energy density, as we had previously seen with the i3 and the i8.

While Mercedes is still banking on diesel for the hybrid components, BMW is sticking with a gasoline engine in the X5 xDrive45e iPerformance. In the previous X5 model, a four cylinder gasoline engine with 180 kW performance was utilized. This version now has a 3 litre, six cylinder gasoline motor, which has a performance of 210 kW. Combined with the 82 kW electric motor, the vehicle has a total system performance of 290 kW and torque of up to 600 Nm. The sprint from 0 to 100 km/h is done in 5.6 seconds. Next to the range increase, the battery upgrade also increased the electric top speed from 120 to 140 km/h. The system is limited to a 235 km/h top speed.

The trunk volume of the SUV was reduced by about 150 litres in comparison to the previous model, although there are some seating configuration options to increase the volume up to 1,716 litres. Another new option with the hybrid version is integrated active-steering. The exact technical specifications were not released however and will follow in another statement, at which time the price will also be revealed.