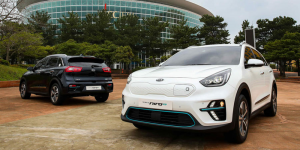 Kia has received the official WLTP range data for the European version of the all-electric Niro, which will be called e-Niro. The crossover electric car will make its first apearance on the continent at the Paris Motor Show and hit the market shortly after.

While the International version of Kia’s press release states that the e-Niro will reach the first clients before the end of 2018, customers in Germany may have to wait until early 2019.

The same for all however is the range measured according to the WLTP testing cycle. And, the performance is impressive for the compact Korean. The e-Niro with a top-trim 64 kWh battery and 150 kW motor reaches a range of up to 485 kilometres in the combined cycle. For city driving alone, WLTP homologated the range at 615 km even.
The basic e-Niro with 100 kW and the standard 39.2 kWh battery still has a range of 312 kilometres.
Total consumption is at 13.9 kWh for the smaller version and 14.3 kWh on the larger battery per 100 km. These are the same values as the Hyundai Kona Electric.

Kia also specified the charge power. At a 100 kW charger suing CCS, it takes less than an hour to charge the bigger battery to up to 80 percent.

The new e-Niro joins existing hybrid and plug-in hybrid variants of the Niro of which more than 200,000 have sold globally since its introduction in 2016, according to Kia. To date, Europe has accounted for more than 65,000 sales of the hybrid crossover.

In South Korea Kia has started sales of the electric Niro reportedly. It is the second purely electric car from Kia after the Soul EV that is sold globally as well. After the market launch in Europe starting in late 2018, the e-Niro will come to North America in the first quarter of 2019.