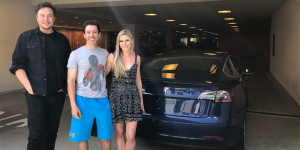 Tesla fan love knows no limits when existing owners offer their help in order to lift the EV maker out of what Elon Musk has called “delivery logistics hell“. On Twitter the fans pledged to do “orientations” for new owners – all for free.

Obviously the paperwork required to get a Tesla Model 3 will not be in the hand of volunteers. Yet, once the tweet was out, all craze broke out. And, it resulted in some actual help all talked about on social media.

A longer post on Reddit spoke of anger in the waiting room (which he could calm) while The Tesla Guy seemed rather happy to help out according to his tweet.

In any case,  this means Tesla is indeed in delivery-logistics-hell. It also means there are actually electric cars to be delivered and that is good news, particularly in light of earlier problems with production of the Model 3.

A report from Inside EVs hit a similar note when it spoke of a Jaguar dealership near a Tesla store, where “the employees were dumbfounded at the number of trucks arriving to drop off fresh batches comprised mostly of the Model 3”. They were told the electric cars weren’t there to stay, as in flying off the shelves, much to their dismay. But at least they have something to look forward to with the Jaguar I-Pace electric car.

In fact, these bulk deliveries of Tesla cars also have to do with the nearing end of this quarter. With the EV maker under pressure to deliver – on numbers as well as cars – the end of Q3 sees them pushing production, leading to transporters full of Teslas.

Tesla is aiming to produce 50,000 – 55,000 Model 3 this Q3 reportedly, whilst attaining profitability on top. This plan is so ambitious, that Elon Musk excused the delivery bottleneck on Twitter with an “extreme shortage of car carrier trailers”. The problem was so severe, they started building their own the CEO claimed. We could not find any picture of such a trailer though but please let us know if you do.

Audi A4 with added health benefits