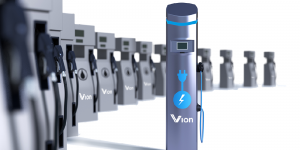 Vion plans to establish a charging station network for electrified trucks in North America over the next few years. Starting next year, 40 to 50 stations will mark the start of the implementation along the most important routes in the USA.

Eventually the network is planned to comprise more than 1,500 stations and include both Canada and Mexico. Vion is currently still on the search for investors. The intention is to adapt the charging stations to the needs of the transport industry. This not only includes the charging capacities of the charging stations, which are supposed to be able to charge a vehicle in 30 to 50 minutes, but also include services at the locations, including shopping and sleeping facilities.

Specifically, the company aims to set up a charging station every 600 km. This is the minimum range, that electrified trucks will be able to reach in terms of range, according to Vions’s estimate. These figures seem to specifically address Tesla’s Semi, which will be hitting public roads next year. This launch, as well as those of other incoming e-trucks in the next two years will be addressed by the network, as no comparable system is currently available in the USA.

The first step of 40 to 50 stations will take an installation time of approximately one year. The first calculations have also already been completed regarding the costs and expected income: Vion expects that the installation costs of a single station will not exceed 650,000 dollars (550,000 euros), “due to the simplicity and technological effectiveness of the Vion electric charging stations.” This figure includes the real estate cost. For 50 charging stations, Vion estimates that the total construction cost, including everything, will run about 37.5 million dollars (32 million euros). Concerning the earnings in these 50 locations, Vion is calculating that about 250 trucks and 100 private customers would use the charging stations daily, bringing in about 292 million dollars annually (250 million euros).

0
electric cars and plug in hybrids

were newly registered in the Netherlands in January, 2% fewer than in the same month last year.