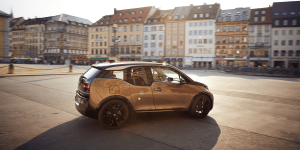 The speculations that appeared in June regarding a potential battery upgrade for the BMW i3 and the i3s to 120 Ah battery cells have been concluded. Following the face-lift, their batteries will hold close to 30% more capacity, that is 42.2 kWh.

When the i3 was introduced in 2013, the batteries had a capacity of 60 Ah and 22.6 kWh, while the 2016 introduced battery increased performance to 94 Ah and 33 kWh. The newest upgrade will boost the range up to 310 km, according to WLTP standards. The market launch will take place in November this year.

Next to the space designated for the high voltage battery and the vehicle weight, the driving performance and energy usage remain nearly unchanged. The BMW i3 is powered by a 125 kW electric motor. Acceleration from 0 to 100 km/h can be done in 7.3 seconds. The electric motor in the BMW i3s has a capacity of 135 kW and can accelerate to 100 km/h in 6.9 seconds.

The energy for both models is drawn from a 42.2 kWh lithium-ion battery. It is made up of eight modules with twelve battery cells each. The battery allows for a range of 285 to 310 km for the i3, depending on the vehicle setup, while the is3 manages a range of 270 to 285 km. The battery can be charged from a regular household plug to 80% in about 15 hours, however a wallbox allows for a significantly faster charging period. The vehicles retain three-phase charging capabilities to 11 kW, in which case the 80% charge is reached in 3.2 hours. The fastest charging option is the CCS option up to 50 kW. This allows charging to 80% capacity to take place in only 42 minutes.

Both the electric motors as well as the performance electronics and batteries are part of the BMW eDrive technology, which is developed in-house by BMW. The lithium-ion cells are constructed in a specialised way and in close cooperation with the cell manufacturer in terms of research and development. This has allowed the carmaker to significantly optimise the batteries. The battery cell competence centre in Munich, which is currently under construction by BMW, will likely help to further support the battery development for the i3 in future.

Parallel to the introduction of the new batteries, the BMW i3 and i3s will receive a new exterior look: a new paint job is available, as well as new interior design options. The lighting system will receive adaptive LED high-beams, with matrix functions. A sport packet will be made available for the i3, which combines a darker design with a sports chassis including improved suspension, stabilisers, a lowered vehicle base and 20 inch wheels. An menu in a tile setup from the iDrive system was also connected to the navigation system. In further connectivity improvements, the vehicles will also include wireless mobile phone charging options as well as WLAN hotspots.

Update September, 28: Due to the sinking battery prices, BMW has decided to offer the models with the range increase at almost the same price as the previous version. This means that the i3 will cost 38,000 euros, compared to the previous 37,550 euro, while the i3s carries a 41,600 euro price-tag (previously 41,150). The range extender will be discontinued in Europe, but will remain available in export markets.

Additionally, all new customers who have purchased an i3 recently will receive the battery upgrade for any vehicle that is produced after the first of November. Three phase charging is now also included serially, as well as DC charging. When prompted whether customers would be able to upgrade their existing battery packs, a BMW spokesperson declined, stating that the global demand hat not been sufficient to launch a line of replacement batteries.