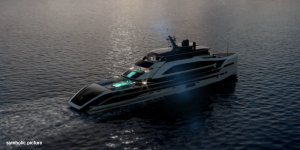 Nobiskrug and H2-Industries have announced their plan to build the first fully electric motor yacht with the Liquid Organic Hydrogen Carrier (LOHC) system on board. The system stores hydrogen in liquid LOHC oil, which is similar to diesel, which is then used to power a fuel cell motor.

The Nobiskrug shipyard and H2-Industries plan to use the ship as a pilot project to establish the use of the technology for every-day operation. They will also gather data to determine how the technology can be applied and adapted in larger and heavier ships.

The core technological breakthrough is the liquid LOHC oil, which can be carried and stored similarly to diesel, and can be loaded with hydrogen as often as desired, transporting energy with it. “This technology is a break-through on the path towards a cleaner environment”, says Holger Kahl, Managing Director of Nobiskrug. The message also added that “LOHC is efficient, low flammable and non-explosive also when loaded with hydrogen,” making the technology both clean and safe.

A fuel cell will then receive the energy, and subsequently power the electric motor. The first yacht with the system will be capable of a range of 1,000 nautical miles, and reach a speed of 10 knots. Additionally, a photo voltaic system will be constructed on the yacht, whose power will also be stored in the hydrogen-LOHC mixture.