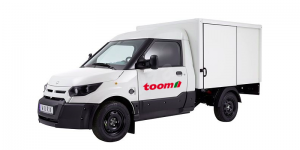 Bosch has developed a taste for sharing. After its Coup e-scooter service is running well, the company is looking to much bigger things. Bosch wants to start lending electric vans of StreetScooter at DIY stores across Germany. If the pilot works, a wider roll-out is imminent.

Bosch has set the start for their new service for this December. Customers at selected Toom stores, a hardware store chain in Germany, will be able to rent the StreetScooter electric van built by DP/DHL to bring home their heavy stuff.

Bosch selected five Toom stores to start with in Freiburg, Berlin, Frankfurt, Leipzig and Troisdorf next to Cologne. Requesting an electric van “will only take a few clicks,” the company claims as booking will be done directly and digitally on site. Users pay a flat hourly rate that includes mileage and battery recharging at stations that have already been installed on site. Vans must be returned to the same station that the shopper picked them up from.

Moreover, Bosch believes that shared electric vans have scope for application outside the hardware-store sector. States a press release: “If the new sharing service proves popular, Bosch plans to expand it to include other partners, whether these be other Toom stores, furniture stores, supermarkets, or electronics stores.”

The choice of StreetScooter has not been made at random of course. Bosch delivers the electric drive components for these electric vans. While they use the basic model for their new van sharing, StreetScooter has officially kicked-off production of their largest electric transporter recently. The StreetScooter Work XL is being produced in partnership with Ford at their facility in Cologne. DP/DHL aims to build 3,500 units a year (we reported).

Apart from collaborating, StreetScooter is reportedly working on completing a second factory for electric vans. Located in the German town of Düren, close to Aachen and Cologne, it will help to reach the planned annual production capacity of 20,000 electric vans. Half of them are set for sale to third parties.