China’s dominance of the electric mobility market still continues unabated. This is one of the results of the newest industry research report by the Center of Automotive Management (CAM) regarding sales trends in the most important global automobile markets.

The study concerns itself with the period from the first to the third quarter of 2018, and puts it in relation to the same period from the previous year. As a core statement, it can safely be said that China continues to hold their place as the world leader for their EV market, and the USA is still growing into NEVs. In Norway, almost every second new purchase is an electrified vehicle, while Germans are still holding out on modernising their personal vehicles.

Regarding the actual numbers, we can see that China saw a total of almost 400,000 electrified vehicles sold during the Q1 to Q3 period last year, which grew an impressive 80% to a total of 718,000 vehicles this year. And that despite the Chinese government subsidies being significantly downgraded in June. The portion of PHEVs in this number is about 25%, and the market share of electrified vehicles vs their combustion counterparts increased to 3.5%, compared to last year’s 2%. Another point to note is that the majority of sales came from local manufacturers, with the strongest importers being Tesla (3%) and BMW (2%). The startup Nio Tesla is also beginning to make waves in the luxury market sector. 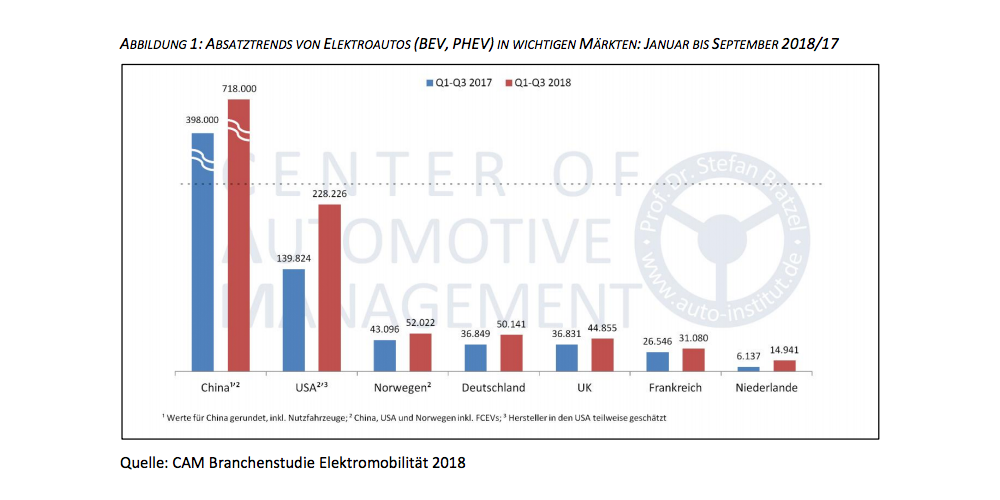 The second largest global market for EVs according to basic numbers is the USA. The number of registered EVs grew from about 140,000 vehicles in 2017 by a 62% margin to 228,226 for 2018, so far. That makes for 1.8% of the total vehicle market share, compared to last years 1.1%. Fully electric vehicles have become more dominant here, with the proportion growing from 53% BEVs to 64%, which is expected to be due to high demand for the Tesla Model 3. Tesla makes up for almost half of the EV market in the United States now.

Norway has continued to build on their state as an exemplary EV nation: Their market share of EVs grew from 37% last year to 46.7% in 2018. The registrations of new vehicles grew from 43,096 to 52,022 vehicles, about 60% of which are fully electric. Combustion motors are slipping into more of a niche role in the Scandinavian nation, as only 16% of the new vehicles had gasoline motors, and 12% ran on diesel. 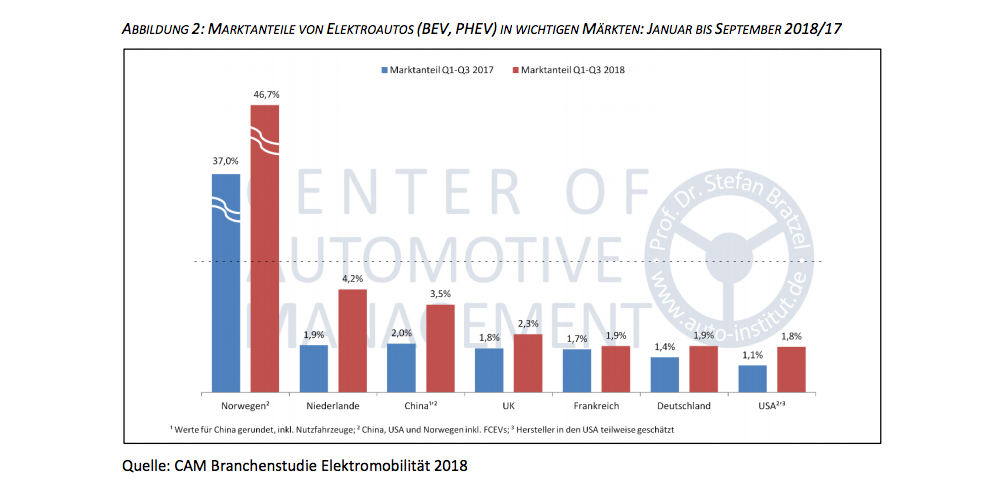 The trend towards electrification is ongoing across Europe, as well, with Germany increasing their EV market share by 36% to a total of 50,141 new registrations and a moderate market share increase from 1.4% to 1.9% of total sales, with BEVs and PHEVs being about the same. The UK followed closely with 44,855 new registrations, and a market share of 2.3%, putting them ahead in that margin. Notable is that three quarters of the electrified sales were made up by hybrids in the UK. France’s growth from 26,526 to 31,080 marks a market growth from 1.7% to 1.9%. The Netherlands had perhaps the most impressive bump in terms of relative numbers, as they managed to jump from 6,137 vehicles last year to 14,941 new EV registrations this year, making a jump from 1.9% to 4.2% market share.