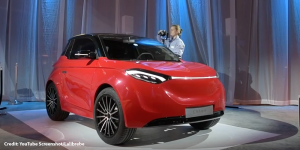 The Taiwanese company has officially taken over a former Caterpillar factory in the Walloon area of Belgium in order to set up production for a small EV named Chloe. The company also took the opportunity to present their BEV.

The first units of the Chloe will likely roll off the production line towards the end of 2020. Thunder Power has estimated an annual production volume of 30,000 vehicles following that. The Chloe will mainly sold on the European market, but a few units will be exported to the USA and Asia.

At last years IAA, Thunder Power presented a serial version of an electric sedan, however, which was said to have a 650 km range. While the move to set up production for the Chloe makes it clear that the sedan has been placed on the back burner. The sedan will follow once production for the Chloe is established, and will also be produced in Belgium with a 30,000 annual production capacity.