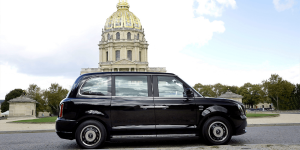 Uber needs their drivers to switch to electric cars in order to continue being able to drive through central London. Therefore the ride-hailing startup that is valued at over 70 billion dollars wants passengers to pay a surcharge.

Uber estimates that said extra fee of 15 pence per mile could amount to £1,500 a year for drivers working 40 hours a week in London. Overall, Uber expects the scheme to raise more than £200m (€227m) over the “next few years”  and that the fee would add about 45p to the average London journey.

Time is pressing in London. Not only is Uber’s license here still under scrutiny. Their drivers must also have an EV by 2025 due to incoming emission regulation and so Uber aims to have a 100% electrified fleet on the Isles by 2022 reportedly. For this they had promised to set up a clean air fund for drivers initially. This tactic seems to have switched to turn to passengers to set off increasing cost by raising prices.

Yet, it is the latest in Uber’s attempt to green their operations. In the States they had launched a pilot scheme to pay drivers an extra dollar per ride if they were driving an electric car already (we reported).

Another initiative is UberGreen. The service allows users to opt for a hybrid or electric car via the app. Yet, it is only available in certain cities such as Bucharest or Lisbon. London is not one of them or not well covered.

Instead a strong competitor is gaining ground in the British capital as Black Cabs catch up with modern times. Were they once were the only ones passengers could simply hail on the street – they keep this monopoly to this day – Black cabs are now also available through an app. Two in fact as both MyTaxi and Gett connect passengers to the iconic taxis in London. Moreover, Gett added a feature in their app that allows passengers to set off carbon emission with a 20 pence charge. More interestingly though, a new icon has been added which allows passengers to specifically request an all-electric cab. The service is limited to Central London from 10am to 8pm on weekdays though.

While this indicates that not that many electric cabs are on the road yet, it also shows that cabbies are getting ready. And they have to. New rules require new cabs to be either plug-in hybrid or completely emissions-free and more than 9,000 electric taxis (about half the current fleet of black cabs), are expected on London’s roads by 2021 reportedly.