The company behind the electric version of the iconic taxi, LEVC for London Electric Vehicle Company that is owned by Geely, is now fully licensed.

The TX5 offers up to six passengers views of the British capital through the sunroof while they may charge their phone or surf on wi-fi.

The taxi is designed to drive fully electric while a 1.5-liter gasoline engine supplied by Geely-owned Volvo charges the battery and stretches the range to up to 640 kilometres, according to LEVC.

The upgrade to the new electric model will cost cabbies about 55,000 pounds but LEVC CEO Chris Gubbey says it will also save about 100 pounds on average weekly fuel costs. Passengers won’t benefit from those savings though as fares stay the same. 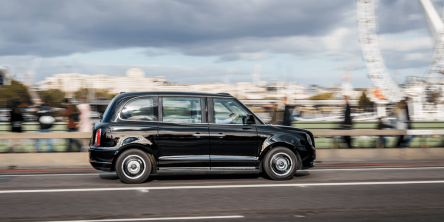 Earlier today, we reported on Green Tomato Cars a private hire service in London that wants to electrify its entire fleet. Both companies claim the Ultra Low Emission Zone regulation that will come into force by 2018 as their drive. The rules require official new Black Cabs to be either plug-in hybrid or completely emissions-free and more than 9,000 electric taxis (about half the current fleet of black cabs), are expected on London’s roads by 2021.

BlueSG ready for its car sharing debut in Singapore