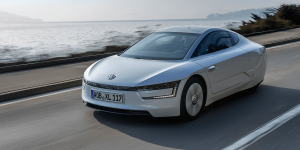 Some of our readers may remember the then much expected Volkswagen XL1, also known as VW’s “Super Hybrid”. Back when Volkswagen first launched the car, it was truly economical and dubbed the one-litre PHEV. Yet, time has moved on.

Moreover, Volkswagen had only build 200 – 250 XL1 for public house so it is safe to say, they did not mean to serially go diesel-hybrid and even less so electric.

Anyway, one of the rare and very aerodynamic hybrids is going under the hammer at Silverstone Auctions next month. The estimate price is £95- 115k, not far from the original asking price. It is unclear if the auctioneers considered the XL1’s rarity or perhaps priced it as an old timer.

For you to look back at another era, we found an old test drive undertaken by Fully Charged. They really did try hard to “sail” in electric mode as long as possible.