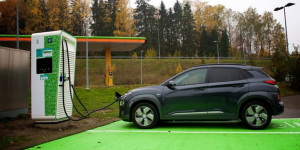 The first high power charger of Fortum Charge & Drive in Finland is live. The 150 kW station is located at a gas station and is part of the Nordic ultra fast charging corridor between Oslo, Stockholm and Helsinki.

Over the last months, Fortum has been opening the first HPC locations in Norway and Sweden. The infrastructure specialist, which is particularly active in the Scandinavian area, mentioned that the new installation in Norway had up to seven times the charging capacity as regular high power chargers with 350 kW, compared to the more common 50 kW. This of course also applies to the new HPC locations in Sweden and Finland.

The HPC in Finland is part of the Nordic ultra fast charging corridor announced between Oslo, Stockholm and Helsinki.