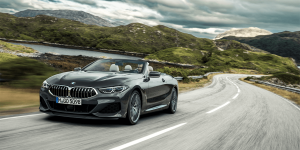 BMW is not the usual carmaker given they have made an earnest effort to deliver, well one so far, electric car as early as 2013. While they are also gearing up to deliver more PEVs in future, they have not yet let go of their gas guzzling past as this truly unfortunate slogan shows.

The advertising agency of BMW cannot have thought very far – apart from wanting to provoke perhaps – but in times of diesel-gate and accelerating climate change, their campaign for the BMW 8 series was doomed to fail.

The advert first appeared in the national paper Süddeutsche Zeitung. The page spread read in German “Gebaut, um den Atem zu rauben”. Translated this means “Built to take your breath away” and plays on the notion of breathtaking.

Clearly, that is a little too close to reality of inner cities in the chokehold of fossil fuel powered cars today. So both German media such as the Tagesspiegel as well as users on social media could not help but notice.

Their remarks went from headlines like “BMW confesses: We deliberately and intentionally contaminate the air” over wondering if BMW could not have come up with anything more foolish considering the circumstances. Even the former spokes person of the German Ministry of the Environment, Michael Schroeren, took up the BMW claim and tweeted: “Finally! The first carmaker confesses and publicly admits why they do what they do.”

But enough of BMW. In fact they are not the only carmaker trying hard to serve two masters. Toyota’s premium brand Lexus has been seen advertising its conventional hybrid technology by trying to set it apart from plug-in hybrid cars and electric vehicles. Their claim of Lexus hybrids beings “self-charging” with “infinite range” could only backfire.

But then there was also the other case of Nissan. Their Leaf advert got banned by the UK advertising watchdog ASA over allegedly misleading claims. Nissan had said the Leaf electric car could largely be charged within an hour.

We wonder, where were these watchdogs when those clean diesel claims were made?

Bright or brazen, or both perhaps?