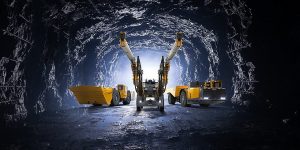 The Swedish company Epiroc has introduced the second generation of their electrified vehicles for underground mining. The vehicles were developed in cooperation with Northvolt and ABB and include a 42-tonne truck, a 14 tonne and an 18-tonne loader, and a series of drills.

The goal for Epiroc is to electrify all of their underground mining vehicles within the next five years. The reduction of diesel usage could save the industry serious money, as currently, up to 40% of the energy used in mines is powering giant ventilation systems to remove toxic emissions.

As the high procurement costs for the electric heavy lifters may still be an issue – they are about double that of traditional vehicles – Epiroc plans to help reduce initial investment costs by renting batteries for the new vehicle palette.

The first generation of the electric specialized mining vehicles was introduced in 2016, but have not contributed much to the company’s bottom line. The second generation, which contains larger and more powerful vehicles, is now hoped to break through to the industry. The marketing is particularly aimed at newer or undeveloped mines, where the expensive ventilation systems have not yet been installed.