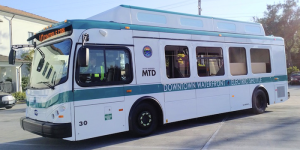 The Californian public transport operator MTD has committed to electrify its entire fleet by 2030. They currently maintain a fleet of 112 buses, 14 of which are already electric.

Santa Barbara MTD has been operating electric buses since 1991, which means they have the necessary infrastructure and experience, although their electric fleet has remained a relatively small component of their total fleet.

Citing health and climate reasons, the company has now decided to completely electrify the rest of the fleet as well over the next decade and aim for zero emission public transit by 2030. Jerry Estrada, General Manager of Santa Barbara MTD, said the following on the subject: “We are committed to making this happen. The whole team at Santa Barbara MTD is proud of our pioneering work in battery-electric transit, and we look forward to continuing to lead the industry towards a zero-emissions future.”

So far Santa Barbara’s MTD failed to state any detail such as the number of electric buses to buy next.