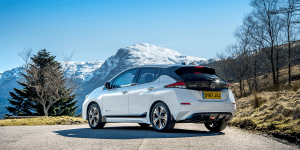 The new version of Nissan’s bestselling electric car with a 60 kWh battery had been expected for some time. Yet, the Japanese carmaker has stepped back from launching the Leaf just now and said they would wait until the controversy around ex-CEO Ghosn flares down.

It is the second attempt of the Nissan management to put as much distance between the board and its formerly celebrated chairman Carlos Ghosn. The top executive is charged with alleged misconduct in Japan and while Renault is only examining the matter, Nissan has started to question the entire alliance’s set-up reportedly.

This latest step of postponing the launch of the 2019 Leaf featuring a 60 kWh power pack (up from 40 kWh) must be seen as a similar attempt. After all, Ghosn is considered the godfather of Nissan’s first electric car that is among the planet’s most sold EVs. Reuters quotes a Nissan spokesperson commenting on the delay saying, Nissan has postponed the launch “to ensure that this important product unveiling could receive the coverage it merits” – meaning not be overshadowed by scandal.

Carlos Ghosn was arrested in Japan for allegedly underreporting his remuneration by around 5 billion yen (about 39M euros) for five years. He received nearly 10 billion yen during that period. Ghosn denies all charges, yet both Nissan and Mitsubishi have stripped him of all posts. Renault has refrained from firing him as chairman and CEO so far but has launched an investigation with the outcome expected this week.

Also this week a meeting of all three carmakers will take place in Amsterdam. Prior to the high level talks, Renault asked Nissan to share their findings from their investigation. Meanwhile, Nissan, the larger partner by sales, has revived its ambition to force Renault to sell down its controlling stake of 43%.