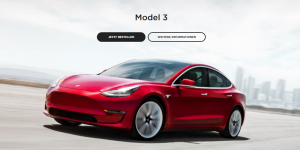 The Californians have officially opened up their configurator for selected countries in Europe. This means that now the all-wheel-drive Model 3 with the long-range setup can be ordered in the German language DACH region. The roll-out for the European market is following the plan, according to the manufacturers.

Over the holiday period, Tesla had opened up the configurator for pre-orders from the region, with the exception of UK with their driving on the left-hand side of the road. The named delivery date was in February or March, meaning that anybody ordering now will most likely receive their new Model 3 in March.

Tesla has announced a base price of 55,400 euros for the long-range version of the Model 3 with all-wheel drive. The performance version starts at 66,100 euros. For the pricing, Tesla has already deducted the manufacturer’s share of the environmental bonus of 2,000 euros (net) from both versions. In addition, however, there are processing fees of 980 euros for both models. In Austria, the long-range version starts at 58,300 euros and in Switzerland at 59,400 Swiss francs. For the performance version, a base price of 69,100 euros in Austria and 71,300 Swiss francs in Switzerland will be charged. Here, too, processing fees of 980 euros and 990 Swiss francs are charged.

Meanwhile, the WLTP range has also somewhat changed for the long-range version. Whereas Tesla previously stated 544 km, the Model 3 actually has a range of 560 km. The performance version, on the other hand, still maintains a range of 530 km.

Furthermore, according to Elon Musk, Tesla intends to produce “significant” quantities of the Model 3 for Europe for the first time this month. The fact that the Californians have started production is somewhat confirmed by the first registered European Model 3 VINs. However, there have also recently been rumours circulating that homologation for the European market might be delayed. Bloomberg reports with reference to an insider, that the type-approval of the Tesla Model 3 in Europe is imminent and deliveries can probably start as planned in February. Tesla has also confirmed that the process is on schedule with the type-approval of the Model 3.