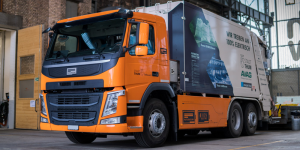 In the Swiss canton of Basel, most if not all waste is soon to be collected with fully electric vehicles. The city government is ready to replace 20 garbage trucks with electric versions despite the higher cost.

The background is that Basel’s existing dump trucks are outdated, which has led to continuously rising maintenance costs. Still, due to the large battery and the lower unit numbers, the electric garbage trucks are currently around 36 percent more expensive than comparable diesel vehicles over their entire life cycle, but the government council is of the opinion that the lower noise levels and the absence of pollutant emissions outweigh the additional costs.

The electric fleet will be charged overnight across six locations of the city cleaning department and in the workshop of the civil engineering office. The municipality plans to install seven charging stations and will only use green electricity for this purpose.

The garbage trucks are to be replaced with the electric vehicles over the coming years. Nothing has been said about the type of truck but Basel has previously run tests with an EV called Futuricum made by the Swiss companies Contena-Ochsner and Designwerk.

Another option for an electric garbage truck would of course be Volvo’s planned model of the FL series and over in China, BYD has been looking into zero emission waste collection for some time as well reportedly.