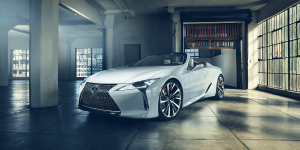 Rumours about a convertible version of the Lexus LC sports car seem to be coming true. At the NAIAS in Detroit, Toyota’s luxury brand now presents the corresponding model called the LC Convertible Concept. The production version is expected before the year’s end.

A year ago, rumours started surfacing that Lexus was flirting with the idea of a convertible version and that this would then also inherit the hybrid drive of the standard model. This would be accompanied by a system output of 264 kW. Only the planned market launch of the so-called LC Convertible Concept has now been officially confirmed, though not the type of drive.

Independently of this, the Cabrio offers the same dimensions as the LC Coupé – the height alone is reduced by 5 mm so that the model looks more stretched. In the following promo video from Lexus, several details are clearly visible: