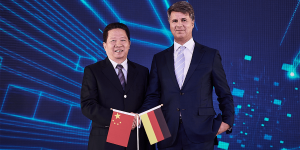 The BMW Group is getting closer to achieving their plan of increasing their shares in the BMW Brilliance Automotive joint venture to acquire the majority. A special meeting of Brilliance China Automotive (CBA) has agreed to the sale of another 25% of the company to BMW.

Around 63 per cent of the shareholders represented were in favour of the sale that will lead to BMW becoming one of the first foreign companies effectively owning a China joint venture with a majority of 75 %, up from 50%. The state had abolished the imposed limit of 50 per cent only recently.

However, the takeover of the shares remains subject to official approval. According to BMW, the transaction will be concluded at the latest in 2022, when the joint venture obligation for car production in China expires.

BMW is prepared to invest 3.6 billion euros for the majority takeover. The partners signed an agreement to this effect in October. It has also been agreed since October to extend the contract for the joint venture ahead of schedule and to intensify the existing cooperation further. The deal is now valid for 22 years (from 2018 to 2040).

Against this backdrop, both partners intend to invest more than three billion euros in new and existing factories in Shenyang in the coming years. For example, a new production facility on the existing plant site in Tiexi will double the capacity of the site. According to BMW, the new plant will be able to manufacture vehicles with fully electric, partially electric and conventional drives on a single production line.

Further extensive conversions and expansions are planned at the nearby Dadong plant. The structure of the plant is to be expanded successively to include future BMW model variants and the expected market growth, while production capacity remains unchanged. As a result, the BBA plants will gradually increase the annual production volume of BMW vehicles to 650,000 units starting in the early 2020s. This will create 5,000 new jobs.

In 2017, the BBA plants in Tiexi and Dadong produced a total of around 400,000 vehicles. Currently, six BMW models are manufactured locally in Shenyang: The Tiexi plant produces the BMW 1 Series Sedan, the BMW 2 Series Active Tourer, the BMW 3 Series Sedan (including longer version) and the BMW X1 (including PHEV version). The Dadong plant produces the BMW 5 Series Sedan (including the PHEV version) and the BMW X3. From 2020, the fully electric BMW iX3 will also roll off the production line at the Dadong plant. The electric vehicle will be manufactured exclusively in China and exported from there.