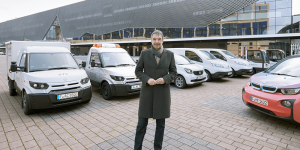 In addition to its existing e-vehicles, Messe Frankfurt is now also using three StreetScooters electric vans as part of a two-year test run. The charging infrastructure will be provided by the trade fair with 13 charging stations on site for both exhibitors and visitors.

In 2011, the company purchased its first electric car as well as a fuel cell vehicle. Today, according to Messe Frankfurt, “several electric cars are available in the company’s own fleet”.

Recently, three StreetScooters electric vans have been added, which, according to Uwe Behm, Member of the Board of Management of Messe Frankfurt, are intended to further improve the company’s ecological footprint. Carpets, signage and even snacks are now transported emission-free on the site.