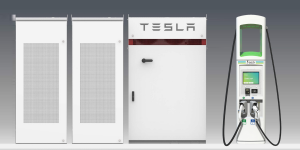 Volkswagen’s redemption subsidiary for diesel gate, Electrify America has made a surprise announcement on cooperation with Tesla. Throughout this year, Electrify America plan to equip 100 charging station across 42 states with stationary energy storage systems by Tesla.

The intention behind the addition is to help VW’s Electrify America mitigate power shortages during peak times, as well as manage operating costs by charging during selected periods. Each of the chargers will be fitted with a 210 kW battery system with 250 kWh capacity made by Tesla. The set up is modular so that they may add more capacity later.

Regarding the agreement, Giovanni Palazzo of Electrify America was taking a serious look at power management: “With our chargers offering high power levels, it makes sense for us to use batteries at our most high demand stations for peak shaving to operate more efficiently.” This is particularly important in the US where drawing a lot of energy from the grid in a short time can incur so-called high-demand charges.

Electrify America’s chief operating officer Brendan Jones laid out the issue to Reuters as follows: “If you pass the demand charge onto the customer in a high-demand charge market it can cost anywhere from $70 to $110 to charge a vehicle.” So obviously driving an electric vehicle could become very expensive.

The new Electrify America chargers backed by Tesla batteries will be deployed across 17 metropolitan areas and along high-traffic corridors in 42 states in the USA, “including two cross-country routes”, according to the operator.

Electrify America did not specify whether the integration of Tesla Powerpacks would take place on a larger scale following the initial 100. However, the modular design certainly implies more extensive plans.

Tesla has recently strengthened their take in stationary energy storage, as CEO Elon Musk told analysts he expected that area to grow “probably twice as fast as automotive for… a long time”.

Electrify America will invest a total of about 2 billion dollars over a ten year period in the development and construction of charging infrastructure for Zero Emission Vehicles across the USA following the emission fraud.