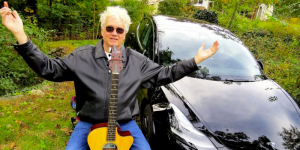 The Philadelphia area musicians Rick Denzien and Debra Lee are convinced electric mobilists. On their last tour, the self-declared Zero Emission Musicians travelled a solid 8,070 miles in their Tesla Model 3 on their way to California and back, visiting over 50 superchargers.

Their tour began and ended in Philadelphia, with a series of recoding sessions, concerts and workshops on the way, and ending with a sold-out show in their home town. While the 100% electric and emissions-free transport is certainly a new record for the industry, it is also nice to see electric vehicles being used on a long-haul basis.

“We made it to LA in 4 1/2 days, saved $1,000 in gasoline and oil on this trip, compared with an average gas car, and saved about 6,725 pounds of harmful exhaust emission from polluting the atmosphere,” said Denzien on the subject of their trip, before adding more on the cost calculation: “The average cost per charge was $4.60, roughly 80 percent less than to fuel up a gas car. We also stopped at destination chargers that remain free as the latest, coolest guest amenity for EV travelers.”