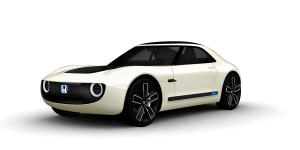 This news was revealed by project manager Kohei Hitomi. Honda presented the Sports EV Concept for the first time in Tokyo in 2017. It is a two-seater sports car with rear-wheel drive that is firmly based on the e Prototype (previously called Urban EV) in terms of design. One and a half years ago it was still unclear whether the study would ever be ready for series production, but now the doubts about it seem to have been dispelled.

The foundation for this development is Honda’s new platform for electric cars in the A and B segments, which enables the upcoming electric cars to come in compact proportions with a relatively long wheelbase, wide track and short overhangs. For the first time, it serves as a substructure for the aforementioned electric prototype, and in future, a whole series of models will see the light of day through it. According to the report as mentioned above, new models will likely exhibit a similar retro-future style to the two concept cars announced so far, so that an entire battery electric vehicle family will be created.

Just a few days ago, Honda announced that 95 per cent of the Urban EV prototype corresponds to the production version “scheduled to start this year”. However, as reported, the series Urban EV will probably not be available for sale until 2020 and it is unclear when the sportier version is to hit the market. The first Honda electric car on the dedicated EV platform will be unveiled this Tuesday at the Geneva Motor Show.