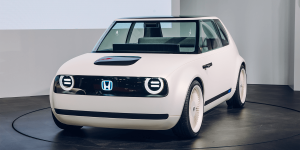 According to an Automotive News report, that first considered the delay, the production car will look very similar to the retro-style concept but will be 10 cm shorter than the Honda Jazz. The “working title” Urban EV is unlikely to remain. Note though, last year the Japanese carmaker announced aimed to sell around 5,000 units of the electric car per year in Europe.

At the same time, Honda plans to say goodbye to diesel reportedly. From 2021, when the new Civic becomes available, there will be no more Honda diesel models in Europe, said Dave Hodgetts, Managing Director of Honda in the UK, at the end of November. In all likelihood, the diesel models will be taken off the market completely after the upcoming model changes. It appears that each series will probably get at least one electrified version as has been the case with the new CR-V that is expected as a hybrid this spring.

By 2025, Honda intends to generate two-thirds of its sales in Europe from sales of electric cars.