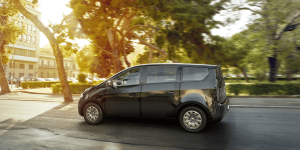 The Munich-based EV startup Sion Motors has presented final designs for their first solar-powered battery electric vehicle, the Sion. The roof mounted solar cells are capable of generating power for up to 34 km per day, enough for most urban rides, says Sono.

Manufacturing for the serial Sion is expected to begin at the end of this year after the solar electric vehicle underwent extensive testing in the form of public test ride events on a roadshow as part of Sono Motors marketing campaign. The company also partook in some cheeky social media campaign establishing themselves as a clear alternative to scandal-ridden traditional carmakers.

The Sion, which Sono likes to call an SEV (Solar Electric Vehicle) is CO2 compensated, according to the manufacturer, and will have a range around 255 km according to WLTP standards, which are then further boosted by the integrated solar panels on the vehicle, depending on weather conditions. Sono Motors has specified a maximal additional range of 34 kilometres. “Since the presentation of our prototype in summer 2017, we have consistently further developed the solar integration technology we have been working on since 2016,” says Mathieu Baudrit, head of the R&D unit for solar integration.

The electric motor was provided by Continental and features 290 Nm torque and a peak performance at 120 kW.

The Sion will hit the market at a base price of 25,500 euro, but if you are interested in buying one, the reservation list already holds 9,500 orders – no surprise at this price. Together with an external manufacturer, Sono Motors is aiming for a production run of 200,000+ electric cars reportedly with market launch set for the end of this year.

The design updates of the serial version of the five-door electric vehicle mainly have enlarged space available to driver and passengers, as well as adding another window. Updates, which were in part coordinated with the community of reservation holders, were also added on the exterior, notably the rear.

Sono Motors is also planning to use the platform of the Sion to develop other EVs, aiming for the areas of urban mobility, logistics and transport, last mile delivery and international markets. Particularly in sunnier countries, the solar electric vehicle would benefit from the environment, making adaptations a logical step, according to the EV maker.