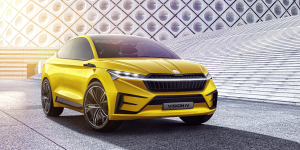 At the Geneva Motor Show, Škoda is presenting the Vision iV, a close-to-production preview of its first electric model based on the Volkswagen Group’s MEB modular system, which is due to be launched on the market in 2020. The drive and battery data match those of the Audi Q4 e-tron concept.

For example, the Škoda four-door crossover coupé is powered by two electric motors with a system output of 225 kW. Mounted on both the front and rear axles, they turn the Vision iV into an all-wheel-drive electric vehicle that can reach 180 kph at peak speeds.

The electric car proves its sprinting capabilities in 5.9 seconds from 0 to 100 kph, but the Vision iV has a top speed of 180 kph at the front and rear. Still, Christian Strube, Škoda Board Member for Technical Development says that “in terms of acceleration, this concept car achieves the highest dynamic values that we have experienced so far with a Škoda”.

The maximum range of the sporty Škoda study is up to 500 kilometres in the WLTP cycle. A liquid-cooled lithium-ion battery with 83 kWh is installed in the underbody, and, according to the Czech VW subsidiary can be recharged to 80 per cent of its storage capacity in 30 minutes.

The Vision iV shares many optical features with the Vision E electric car concept presented by Škoda in early 2017. The engineers have taken up or further developed many design elements, especially in the interior.

But first a look at the dimensions of the crossover coupé. At 4.66 m long, 1.93 m wide and 1.61 m high, the BEV has new proportions for Škoda conditions, which manifest themselves above all in a short hood and long passenger compartment. As modern optical elements, the manufacturer has inserted a horizontal light strip and a covered grill in the “face” of the vehicle. It also dispenses with handles on the doors and uses cameras instead of mirrors. “This reduced design symbolises the simple operation of our electric vehicles. Illuminated elements and the new lighting technology also set exciting visual accents,” emphasises the Czech company.

According to Škoda, the exclamation point in the interior is the arrangement of the instrument panel and centre console in various positions and levels as well as a “floating” screen. Rotating seats also indicate the autonomous driving capabilities of the BEV. The manufacturer further stressed that “the Vision iV enables autonomous driving at level 3, so it is able to take over control on motorways and communicate independently with other vehicles,” according to an accompanying press release.

As far as infotainment is concerned, Škoda speaks of a system of the latest generation that enables access to the manufacturer’s mobile services as well as voice control and networking services. For example, the study can be opened and closed using a smartphone, i.e. a digital key.