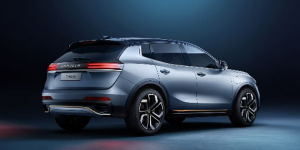 The premium electric brand Enovate owned by the Chinese manufacturer DearCC, has begun construction of its first electric car factory. The target capacity is 60,000 vehicles per year. Enovate’s first model is an electric SUV called ME7.

The company has announced that they will open the order books for the electric SUV for Auto Shanghai in April and start deliveries in the second half of the year. As far as the new production facility is concerned, there is talk of a factory area of around 330,000 square meters and an investment volume of almost 700 million euros.

Over the next five years, Enovate plans to build eight models, including two sedans, five SUVs and a multi-purpose car (MPV). At the same time, the manufacturer intends to achieve a sales volume of 360,000 vehicles per year by 2025, whereby the company intends to cover both the private car market and the leasing, luxury car and sharing market.

Enovate’s parent company, DearCC, has been known for its small and affordable electric cars. Under the umbrella of the new subsidiary, the Chinese company now plans to launch three vehicle platforms designed primarily for intelligent and networked driving. The company is said to have recently changed its name from Zhejiang DearCC Automobile Technology to Enovate Automobile Technology Group.

BMW & Daimler to make savings with a small electric car