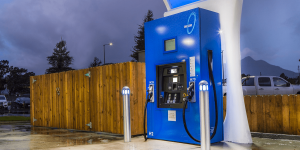 The additional capital came from Mitsui Group’s U.S. based subsidiary Hy Solution and Air Liquide, each adding $12 million to the pot. FirstElement will now use the money to grow their capacity from the current 7,000 fuel cell electric vehicle capacity to be able to serve more than 28,000 vehicles.

California Energy Commission vice chair Janea Scott has big hopes for the growth of electric and hydrogen infrastructure in the state of California: “Private investments such as those announced today, represent a tremendous opportunity to accelerate California’s transition to a zero-emission transportation market, which in turn helps the state meet its air quality standards and achieve its climate change goals.”

FirstElement’s CEO Jiel Ewanick went a step further, citing the international partners involved in the project, which could potentially serve as a pilot project in future: “American, Japanese, and French companies are coming together to invest in a retail hydrogen network that is the first of its kind anywhere in the world. This shows the critical role that California is playing in a global energy transformation, and it’s based on a business case that allows us to expand and drive down the price of hydrogen fuel, all with a road to profitability and sustainability.”