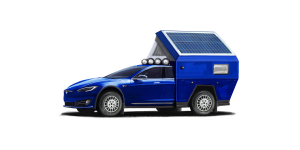 In addition to the conversions of the Tesla Model S as a shooting brake and hearse, there is now a fresh conversion: Entrepreneur Travis Rabenberg has developed a camping superstructure for the BEV and plans to present a prototype of the “Tesla Roamer” next week in Michigan.

The design was somewhat lackluster, so hopefully the final version looks better than the previously published rendering.

Have you ever taken your Tesla for a walk?