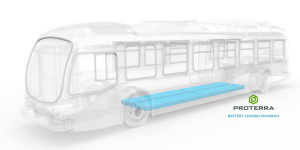 What is the biggest perceived obstacle when electrifying public transport? The up-front cost of electric buses. So Proterra has launched a $200 million credit scheme to enable battery leasing over twelve years for transit operators.

The US manufacturer has teamed up with Mitsui & Co. of Japan to create the new credit facility. The scheme helps to offset the battery price, and Proterra says, its electric bus thus has “roughly the same price as a diesel bus”. Partaking public transport companies buy the bus separately. This also helps budgeting the battery cost, well lease, that then runs under operating cost, just as diesel fuel would. Needless to say, the contract includes a 12-year warranty and maintenance as well.

Mitsui and Proterra go further and aim to reutilise the power packs after their service life. The e-bus maker designed the power packs with “simplified integration for easy removal and a form factor that enables repurposing,” according to the statement.

While this battery leasing scheme is one of those ideas that leave you to wonder why not more companies are doing this, Proterra had experimented with the option before. The new programme only enlarges the application thanks to the new partner Mitsu. More so, battery leasing has proven an effective measure to stir up an emergent market – Renault had made it compulsory for years when the French launched the first electric vehicles earlier in this decade and newcomer Sono Motor wants to include the option in future reportedly.

But back to the big players like BYD that is running a leasing programme in the States as well, together with Generate Capital from San Francisco. In the case of the Chinese though, the offer includes a leasing option for the entire bus, not the battery reportedly and the JV partner effectively buys the electric buses from BYD.