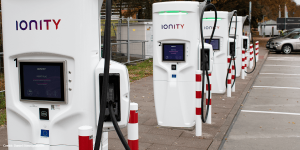 The Ionity high power charging joint venture announces that it secured the financing of the EUROP-E project, which it is coordinating. The project involves the construction of a total of 340 HPC stations, each with a charging capacity of up to 350 kW, in 13 EU member states.

Ionity will invest a total of 195.5 million euros in the project, which runs until the end of 2021, of which the EU will provide up to 39.1 million euros through its “Connecting Europe Facility for Transport” (CEF-T) program. According to Ionity, 38 HPC locations of the EUROP-E project have already been put into operation, with a further 32 sites in the final construction phase to follow in the coming months. At the same time, the stations are also part of the store network of 400 HPC locations in 23 European countries, which is being promoted by the joint venture under its own flag.

EUROP-E aims to make it possible for electric vehicles to cover long distances in the future, such as from Poland to Portugal or from Sweden to Italy. The project concentrates on covering the nine corridors subsumed under the designation TEN-T (Trans-European Transport Networks) and will also extend to remote areas or regions with still low acceptance of electric cars. The stations will be built at an average distance of 120 km along motorways.

“We are delighted EUROP-E was selected by the EU to deliver a high-power charging network throughout Europe,” said Michael Hajesch, CEO of Ionity. The co-financing through the Connecting Europe Facility is an important building block.

In terms of corridors, we recently reported from the opening of the Nordics corridor that will connect Norway, Sweden, Denmark and lastly continental Europe with a network of high power charging stations. Only yesterday, Ionity also secured a long-term partnership with the Austrian electromobility provider has·to·be. The company delivers software and services for the high power charging station network.