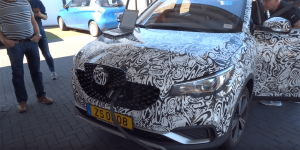 The British SAIC brand MG Motor is launching its first electric model this autumn. A prototype of the MG ZS EV was recently filmed charging in Germany. According to the technicians, the E-SUV delivers 110 kW and offers a 44 kWh battery for 280 km WLTP range.

The electric vehicle was filmed at a charging station at the rest stop Kreuz Hilden in the German state of North Rhine Westphalia resulting in the following documentation of the prototype: