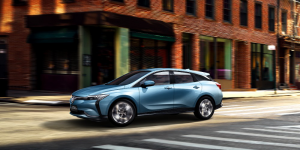 The Velite 6 is based on the concept new energy vehicle unveiled in November 2016. The launch of the EV has been preceded by the Buick Velite 6 in PHEV form that also uses two electric motors but combines them with an ICE. Already ion 2018, Buick said it also got an all-electric Velite lined up, and the Velite 6 has indeed arrived. However, only with delays because the locally sourced A123 Systems batteries initially failed to meet GM’s performance and safety standards during testing reportedly.

Finally, Buick and SAIC-GM are offering the all-electric Velite 6 in three variants at a price between RMB 165,800 and RMB 185,800 (US$24,800 – $27,800) after federal subsidies for new energy vehicles. Still waiting in line for launch is the Buick Enspire Concept, an electric SUV using Buick’s so-called eMotion propulsion technology with two electric drives arranged in front and back for an all-wheel drive. The modular battery design is to combine for up to 600 km range on a single charge.

Jean Liu-Barnocki, general director of Buick for SAIC-GM consider the new models the start of a “new journey in our largest market to build on our sales of 10 million vehicles over the past two decades.”

Following the introduction of the first electric car, Buick also announced a strategic cooperation with EVCARD to set up an electric vehicle sharing platform in China. The first 5,000 Velite 6 vehicles are to be put in operation by EVCARD with immediate effect.