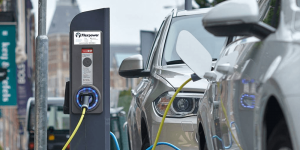 Vattenfall and the City of Amsterdam are now jointly operating an intelligent public charging network under the name Flexpower. It is able to match the charging speed to the electricity consumption and the generation of renewable energy.

According to the initiators, the system is designed to make optimum use of the available grid capacity. A total of 456 charging stations have been upgraded, which includes 912 charging points from Vattenfall, which are now connected to the intelligent charging network. This marks one third of all charging stations in the city.

In addition to Vattenfall and the city, the local network owner Liander, and the infrastructure competence centre Elaad and the University of Applied Sciences Amsterdam, are all onboard. The start of operations last year was preceded by a test run with 52 charging stations or 104 charging points.

“Flexpower Amsterdam is a smart network of charging stations that enables faster charging of electric cars when the sun is shining,” emphasises Tomas Björnsson, Head of E-Mobility at Vattenfall. Furthermore, the process primarily uses locally generated renewable electricity from households in the neighborhood. “This lowers the need for investments in the electric grid and thus makes the solution a role model for many large cities in Europe,” says Björnsson.