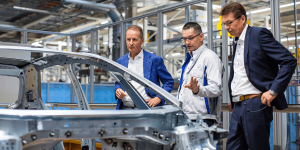 The transformation of the VW Zwickau site into a purely electric car plant is fully on schedule. According to VW, more than 200 ID.3 pre-series vehicles have already been successfully produced.

Volkswagen claims that this is the world’s first electric transformation of a large conventional car factory. In the future, the Zwickau plant will only make e-vehicles based on the Modular Electric Drive Toolkit (MEB) and have a production capacity of 330,000 vehicles a year.

The first mass production vehicles are scheduled to roll off the assembly line at the end of 2019. From the end of 2020, only electric cars will be built in Zwickau – up to 1,500 per day for Volkswagen and other Group brands. The first phase of the conversion has been successfully completed as approximately half of the 1,500 new robots in the body shop are already in operation. The paint shop is currently being expanded and the conversion of the first line in final vehicle assembly is scheduled to start this summer.

The training programme for employees on the road to electromobility is also making progress: around 2,800 of the 8,000 employees have already been trained. Jens Rothe, Chairman of the Central Works Council and Deputy Chairman of the Supervisory Board of Volkswagen Sachsen, praised the broad-scale education drive for employees enabling the move toward electric mobility. “We’re working intensely to prepare our colleagues for the new topics. Around 2,800 of the 8,000 employees have already undergone training. We’re making good progress in that.” Volkswagen has released the following video in English regarding its re-training programme.

“We don’t just want to provide information and training, we also want to instil enthusiasm,” said Daniel Stolka from the Volkswagen Lean Academy, where the programme was developed with the Volkswagen Training Institute and the Zwickau training centre.

It was only on Wednesday that Volkswagen announced the name of the all-electric model and launched the pre-order campaign online for the premiere edition, which is limited to 30,000 vehicles. Just 24 hours after opening the pre-sale, Volkswagen says it received over 10,000 ID.3 reservations throughout Europe. The run on orders has led to hitches in the booking system which the company says it is working hard to eliminate.