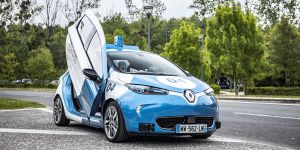 Renault, Transdev Group, IRT SystemX, Institut Vedecom and the University of Paris-Saclay in France have just inaugurated the Paris-Saclay Autonomous Lab project. The Lab is now testing new autonomous, electric and shared mobility services in and around the Paris-Sanclay urban campus area.

The Paris-Sanclay Autonomous Lab project involves a comprehensive autonomous transport system with autonomous electric vehicles, an operating control centre to supervise the services, connected infrastructure and customer apps. The experiments conducted at the Lab are designed to identify the requirements for rolling out an autonomous mobility service on a broader scale. The project is an integral part of Groupe Renault’s “Drive The Future” strategy aimed at offering autonomous mobility services as early as 2022.

With the inauguration, two practical tests were launched: A night collective transportation service using an autonomous Transdev-Lohr i-Cristal shuttle that will serve the Saclay Plateau neighbourhoods from the Massy station. This service will be provided outside the normal operating hours of the regular transportation systems and will use the existing dedicated bus lane. At the same time, a daytime on-demand car service using autonomous Renault ZOE Cab prototype vehicles will be provided on the Paris-Saclay urban campus. People travelling to the campus by public transportation can then use a specifically designed Marcel smartphone app for transport around the campus.

With the aim of transferring and supporting developments in alogorithms for industrial partners, the University of Paris-Saclay’s Ensta ParisTech’s IT and Systems Engineering Unit has focused on developing algorithms covering route planning, obstacle avoidance and intersection management.

The Vedecom Institute for Energy Transition contributes its multi-disciplinary scientific expertise. In addition to research and development of smart connected infrastructure, connectivity modules, standardized interfaces, communication between vehicle and vulnerable street users (such as children), as well as the collection and analysis of user needs and expectations.

Both vehicles used in the initital test services, the Renault Zoe ab and the I-Cristal shuttle from Transdev will be used to refine interface ergonomics inside and outside the vehicles. The Vedecom Institute will study and analyse user feedback on the acceptance and appeal of the services offered, to prepare their future profitability.

A small electric car or a very roomy handbag?