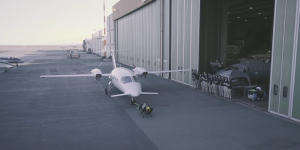 It looks like a dog’s job as a human’s best friend may fall prey to automation. The HyQReal feeds on a 48-V battery and was initially conceived as a rescue dog.

The robot was developed by scientists at the IIT-Istituto Italiano di Tecnologia. The engineers working on the HyqReal recently pushed their dog-like robot to the limit at Italy’s Genoa Airport where it towed a small plane as shown in the video below.

As you can imagine, robots can be very helpful in disaster situations – such as clearing away rubble or entering inhospitable environments. While some robots have a narrow and/or adaptable shapes for things like crawling through small spaces, others can jump over obstacles or organize themselves in swarms. This was the case with the pack of robot-dogs we reported on recently who hauled a truck. Now, this dog-bot has the strength tow a plane single-leggedly.

For those who haven’t got so much time today, go straight to 2:42 to see this robot move:

The HyQReal is driven by four electric motors – one on each leg. The enormous strength in the robot’s legs comes from hydraulic pumps, the ends of which can grip the ground thanks to a special rubber coating. Kevlar makes up the surface of the beast and a cage of aluminium brackets are meant to protect the robot from falling debris in disaster zones.