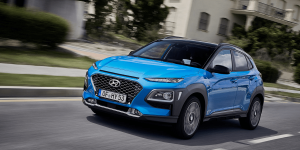 Hyundai is expanding the model range of the Kona by another electrified variant: Starting in August, the compact SUV, which was previously offered as a combustion engine and as a fully electric car, will also be available as a full hybrid in Europe.

With the Kona Electric, Hyundai already has a popular electric car on offer. However, the delivery times are long and despite the long range of more than 450 kilometres not every customer wants to buy an electric car – but also not a pure combustion engine. The Kona Hybrid is intended to close this gap.

For the drive system, the new variant uses widely-known technology from the Hyundai-Kia Group. The combination of the 1.6-litre naturally aspirated petrol engine (77 kW) and a 32 kW electric motor is already being used in the Hyundai Ioniq Hybrid and Kia Niro Hybrid. The system output of 104 kW (141 hp) also corresponds to the two models already available.

The interior of the Kona Hybrid has been slightly upgraded: a seven-inch display is standard, and a 10.25-inch monitor with a navigation system can also be ordered for an extra charge. The Blue Link smartphone app is also available for the Kona Hybrid. The SUV thus largely offers the functions that Hyundai also introduced with the model upgrade of the Ioniq Hybrid.

The new hybrid model is scheduled to go on sale in August. Hyundai has not yet stated any prices.