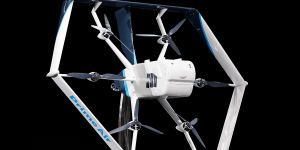 The new drone can lift-off and land vertically like a helicopter, but has the more effective aerodynamics of an aeroplane. The drone employs diverse sensors and advanced algorithms such as multi-view stereo vision, to detect static objects along its journey. To detect moving objects, like birds or other aircraft, the drone uses proprietary computer-vision and machine learning algorithms.

Amazon putting the drone into operation to carry out deliveries is still highly dependent on regulators clearing the way for delivery drones. Amazon also has yet to face a number of hurdles with the drones, such as the irritation of drone noise or the challenges of flying in the rain.

Amazon is aiming to have 50% of its deliveries net carbon zero by 2030, and is engaging a number of strategies to this end: The US-American global order-and-delivery giant is testing mobile robots, investing in electric cars and EV infrastructure as well joining up with Toyota on a new all-electric and autonomous vehicle platform.